With Terry joining the team at Red Oak Farm, we have been able to add another layer of expertise to the business.

When training or teaching, she scrutinizes saddle fit and optimization of bitting, noting the horse’s way of going. She then devises a program of physical therapy exercises to fix weaknesses, flexibility issues, and lack of balance. Using the modalities available to her, Terry has taken horses with gait abnormalities, body symmetry issues, and behavioral issues and turned them into productive, functional animals. 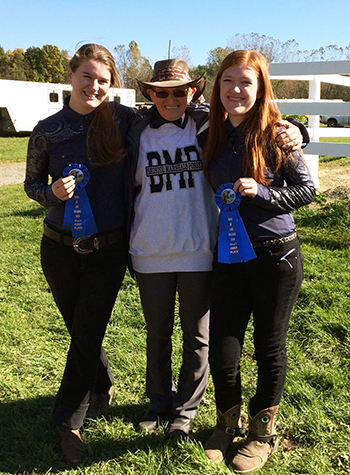 Trainer Bio: Terry’s interest in horses began as a child showing in 4-H and then went on to show Class A Arabs. She started training and riding for others as a teenager, accumulating many Class A and Regional wins in Western, Country English Pleasure, Show Hack, Park Horse and Hunt Seat Pleasure for 30 years.

She then turned her interest to Dressage while she continued to train and teach the other disciplines finding that dressage enhanced the performances of those disciplines.

In her career Terry has taught horsemanship for Indiana University, Kokomo and was with the Bristol Marshal’s Posse for six years, eventually becoming the training officer.

Having shown her Arab gelding, Fire, to fourth level, she is currently working with a new horse, hoping to show at regionals and qualify for the nationals at second level. Terry’s students have gone on to wins in equitation and pleasure in all disciplines.

Update: Terry qualified for the Arab Nationals at the regional show held in Edinburgh, Indiana on the weekend of June 16, 2012! Congratulations, Terry!